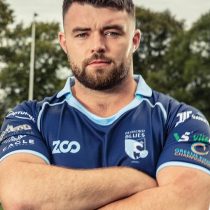 Worthington has been an integral part of the RGC team which sat fourth in the Welsh Principality Premiership in 2017 season.

The No.8 attracted attention from a number of Championship clubs but it was Bedford Blues that he chose to sign for in December 2017.

Worthington, who has featured for the Dragons in the Anglo-Welsh Cup against Northampton and Scarlets, is a powerhouse of a unit from Penybontfwar who combined playing rugby with a being a farmer before making the move to Goldington Road.

In May 2018, Worthington signed a deal to remain at Bedford Blues for the 2018/19 Championship season.

The following year, Worthington put pen-to-paper on a new deal to remain a Blues player in 2019/20.