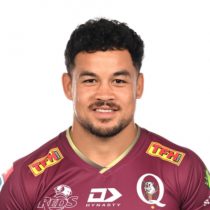 Paisami was a member of the Blues U18s development program before he moved to Melbourne with his family in 2016.

His performances for the Melbourne Rising led to a Super Rugby contract for the 2018 season, where the youngster will look to make his debut.

He didn't make his debut during the 2018 or the 2019 season before making the switch to the Queensland Reds where he was named on the bench for the opening game of the season against the Brumbies.

After nine caps for the Queensland-based side, the destructive centre re-signed with the Queensland Reds for a further two years.

An excellent season for the youngster in 2020 with the Reds saw him earn a call up to the Wallabies' squad.

His highlight reel includes some heft hits, scathing runs and slick offloads which could serve him well at test level.