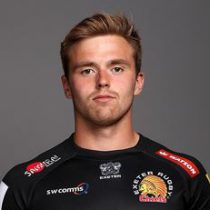 Born in Exeter, Strong developed through the Exeter Chiefs academy making his first-team debut as a 19-year-old in the LV Cup against Harlequins.

He went on to make four senior appearances at Sandy Park before being dual-registered with Cornish Pirates in summer 2017.

Strong spent two seasons at the Mennaye, featuring 15 times in the Championship.

In July 2020, Doncaster Knights moved to bolster their midfield options with the acquisition of the centre from Nottingham Rugby.

He arrives in Doncaster having enjoyed a fine 2019/20 season with the Green and Whites, notching up three tries in 17 appearances aiding the Lady Bay-side to a sixth-place Championship finish.