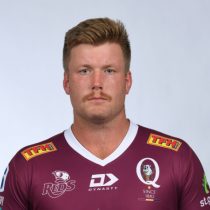 Having played Queensland Schoolboys, Australia Schoolboys, and Australia U20 the move into the NRC and Super Rugby was the natural progression

Hoopert made his Super Rugby debut in an upset win over 2016-2017 Super Rugby finalists the Lions at Suncorp Stadium.

He went on to represent the Australian U20s for the first time at the Oceania and World Rugby Championships.

He also made NRC debut for Queensland Country in Round 1 and went on to play in every match, including the 2018 Grand Final against the Fijian Drua.

2019 saw him play 12 Super Rugby matches across the season that included scoring two tries and also making his debut start at prop when he packed down against a world-class frontrow in the number one jersey against the Sharks in Durban.