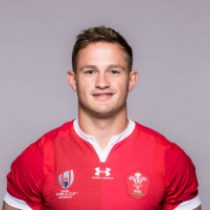 A medical student, Hallam Amos is a talented outside back who made his debut for the Dragons in the LV= Cup victory away at London Wasps. He scored a first-half try in the game in which he became the youngest ever regional player at 17 years and 28 days. This was surpassed in the same game by 16-year-old Jack Dixon but Hallam still holds the record for youngest regional starter and try-scorer.

He has the ability to play right across the three-quarter line but specializes in the back three, where he brings real strength in depth.

At the end of the 2018/19 season, he left the Dragons after eight seasons with the province during which he made 115 appearances scoring 36 tries.

He furthered his career with a deal at Cardiff Blues in 2019, making his debut against Leicester Tigers in November of the same year.

As of May 2020, he has made 9 appearances for the Cardiff Arms Park side and has scored 5 points.