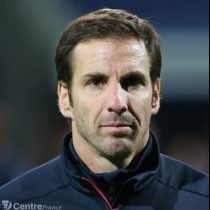 Gonzalo Quesada is a retired Argentine international. He won 39 caps for Argentina at Fly-half between 1996 and 2003.

He made his international debut at the age of 22 against the USA in 1996.

Quesada retired following his side loss to Ireland in the 2003 Rugby World, a match where he scored 12 of Argentina's 15 points.

Quesada was known as Speedy Gonzalo due to the extraordinary length of time he took preparing to take kicks at goal.

He was the top point scorer at the 1999 Rugby World Cup in Wales, scoring 102 points.

Following the World Cup Quesada joined French club Narbonne, he would leave the club in 20 to join Beziers.

Toulon would be Quesada's final French side before returning to Argentina in 2007, where he would finish his career at Hindu.

Quesada returned to France as a coach in 2008, as he took on the role of back-line coach with the French national team from 2008-2011.

At the end of the 2011 World Cup Quesada joined Racing 92 as an assistant coach and a year later the head coach.

In 2013 he moved to Racing Metro's rivals Stade Francais and has been the Head Coach there ever since.

He left club at the end of the 2017/18 season and soon after he was named as the new Jaguares Coach.