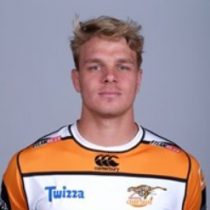 Olivier is another ex Shimlas and Grey College boy who has made his way into Franco Smiths Cheetahs side. Olivier is a tall loose forward making it possible for him to pack down at lock and providing additional line out options for the Cheetahs.

He first represented Bloemfontein-based side Free State at the high school level, playing as a lock for them at the Under-18 Craven Week competition held in Welkom. Olivier played for UFS Shimlas during the 2014 Varsity Cup. After the Varsity Cup, he also became involved with the Free State XV in the 2014 Vodacom Cup competition. He made his first-class debut by playing off the bench.

After the 2015 Varsity Cup, Shimlas head coach Franco Smith was appointed as the head coach of Super Rugby side the Cheetahs and he included four Shimlas players in his first match in charge against the Waratahs, with Olivier named as a replacement forward for the match.

After a long-term injury, Olivier got back on the field in the SuperSport Rugby Challenge, he played his first match on 28 April 2018 against the Griffons.