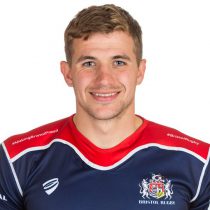 George Perkins has an impressive resume when it comes it comes to rugby, having represented England at U17, U18, U19, U20 levels while playing club rugby for Saracens Storm and Old Albanians, a loan spell.

George played in every Six Nations game for England during the 2015 campaign scoring 5 tries, the most important of which came in the final game against France, the win secured the title for England U20 team.

21-year-old Perkins – who helped England's U20 side to the Six Nations title in 2016 – has been dual-registered with Bedford Blues for two seasons, scoring twice against Bristol at Ashton Gate in September 2015.

Perkins joined Bristol at the start of the 2017/18 season, where he joined up with Pat Lam.

In January 2018, he was loaned from Bristol to Championship side Hartpury.