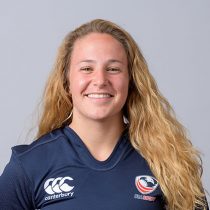 Coming from a rugby family, Gabby Cantorna picked up the game at age 14 as her father coached a local high school team and her sister played at Penn State. Quickly climbing through development, Cantorna was selected to the USA Under-20s for three consecutive years from 2013-15 and was honored as a Collegiate All-American for all four years of college at Penn State where she was also a 4 time National Champion.

In 2017, Cantorna earned MVP honors in the D1 Elite National Championship final and was then selected for the Women's Eagles 15s Autumn Internationals in November of 2018. There, she earned her first cap against New Zealand at The Rugby Weekend in Chicago. She was selected to start for all three test matches of the fall tour.