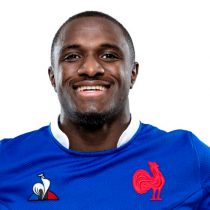 Born in Cameroon, N'Gandebe arrived in France aged 19. He started rugby in Bobigny, then joined Massy, where he played Federale 1.

He won Federal1 with Massy in 2016-17 season which earned promotion to the Pro D2. N'Gandebe is well regarded for his outstanding athletic qualities.

He was a member of the France U20 side that played at the 2017 U20 World Cup in Georgia and signed for Montpellier on a three-year deal.

After starring for Montpellier for the first two seasons at the club he was called into France's squad ahead of the 2020 Six Nations.

Ngandebe extended his contract with the MHR for three seasons (+ 1 optional), until 2023.