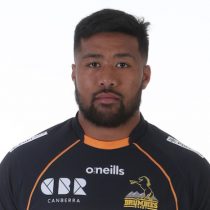 With his first and last name being a composition of Israel Folau and the Fainga'a brothers you could be excused to taking a second glance at Folau Faingaa.

However, the Sydney-born hooker bears no relation to Israel Folau, nor the twin Wallaby brothers Saia and Anthony Fainga’a. A dynamic and powerful No.2 of good size, Fainga’a made a strong impression on national coach Michael Cheika in 2014 when he was a member of the Waratahs' U20s.

The Sydney raised and of Tongan heritage hooker does have a strong family connection to rugby, however, as his father used to play for Canterbury, his brother was also handy while his cousin, Chris Siale, played centre for the Waratahs and Reds throughout the 2000s while Wallabies' rake Tolu Latu is his cousin.

Fainga’a was a member of the Australian under-20 team in 2015 and played for both the Sydney Stars and the NSW Country Eagles in the National Rugby Championships as well as starring for Sydney University in the Shute Shield.

At the time Fainga’a was happy working as a concreter and playing club rugby however his subsequent selection for the Australian U20s in 2015 ignited his professional hopes and he trained with the senior Waratahs for eight weeks.

Two seasons in the National Rugby Championship with the Sydney Stars and then the 2016 runners-up, the NSW Country Eagles, were followed by a surprise call-up to the Wallaby camp ahead of the 2017 3rd Bledisloe Cup Test. At that time Fainga’a, while signed to an extended playing squad contract for the 2018 season with the Brumbies, had not played a single match of Super Rugby.

Fainga’a didn’t even start his season as the Brumbies' first choice hooker however a horror hamstring injury to Josh Mann-Rea provided an opening that he gladly accepted. Fainga’a debuted off the bench against the Rebels and a little over five months later ran on to Eden Park for his maiden Test. He brings a strong work ethic and a desire to improve in his role at hooker and is a great asset to the side at the set piece.

In 2019 Fainga’a starred during the Super Rugby season as the Brumbies near unstoppable rolling maul paved the way for him to equal Malcolm Marx’s record of 12 tries for a forward.

After representing the Wallabies at the World Cup, Faingaa signed a new three-year deal with the Wallabies and Brumbies. He heads into the 2020 season with 30 Super Rugby caps and has scored 15 tries for the Brumbies, as well as 12 test caps.