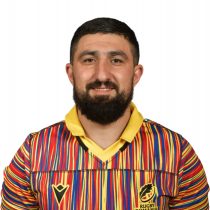 Romanian stalwart Florin Vlaicu has been based in Romania since the start of his career in 2005, representing CSA Steaua Bucuresti, Bucuresti Wolves, Farul Constanta and his current team CSM Bucuresti. Vlaicu made his Test debut in 2006 and went on to represent Romania at the 2007 and 2011 Rugby World Cups.

2015 saw him make his third appearance at a world cup, which later followed by the inclusion in the Romania squad for the 2017 Rugby Europe Championship.