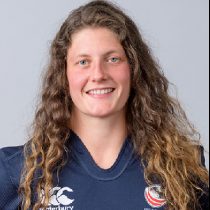 Hoese started playing rugby after she was cut from the varsity soccer team in college. She became hooked on the sport after she went to a practice focused solely on tackling and rucking. She helped lead her team to victory at the Collegiate DII Championships in 2011 where she was also named MVP.

When not playing rugby, Evan is seen coaching the Berkeley All Blues D2 side and serving on their exutive board. She is often a guest coach for local universities. Hoese is currently on the board for the Northern California Rugby Football Union (NCRFU), and was on the host committee for the 2018 World Cup 7’s in San Francisco.

She recently made her debut for the Women’s Eagles at The Rugby Weekend in Chicago, IL.