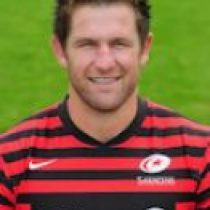 The big South African loose forward made a good start to his career in Johannesburg with the Lions, where his leadership skills were identified and he captained the team briefly. Joubert's grand father, Piet Malan, was a former Springbok Flank.
While his move to Saracens in 2009/10 may have initially raised eyebrows, it proved to be a great decision. Joubert was regarded as one of the best No.8s in England and took over the captaincy in 2010 while Steve Borthwick was injured. Joubert is a key member of the Sarries squad and his consistency and high work rate made him the ideal team man.

Joubert's career continued at Sarries up until 2015 when he decided to hang his boots up,his career included playing 160 games for Saracens, over 30 games for the Lions, as well as representing Boland and Western Province. Joubert's professional career lasted over 12 years, of which 6 were spent at Saracens.

Joubert won two Premiership titles and a Lv=Cup title at Saracens, as well as scoring 13 tries during his time in London.