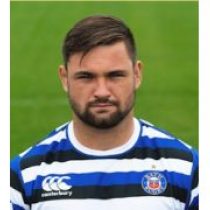 He has represented England throughout the age groups, including a call-up to the England Saxons in January 2014.

The lock, who originally hails from Worcester, made nearly 70 appearances for the Cherry and Whites since his debut in the 2012/13 season, and has impressed with his hard work and influential play both in the tight and the loose.

Stooke has continued to go from strength-to-strength in a Bath shirt, with a series of impressive performances during the 2016/17 campaign.

Eddie Jones included the Bath lock in his November Squad ahead of the 2018 Tests.

In March 2019 Stooke was called up as cover to England's Six Nations squad.