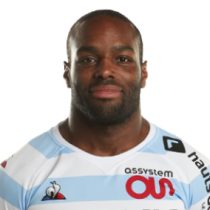 Born in Trappes, France, to Nigerian parents, Arous has grown into a solid front row technician for France and his club Racing 92. He came through the underage system at Racing 92, having played in the fourth division of French rugby up to the age of 16.

Arous enjoyed a successful underage career, winning a European championship with the U18 side and playing 9 times for the U20 side. In 2010 he made his debut for Racing 92, having graduated the academy to feature in a 51-20 victory over Bourgoin. Starring in Racing 92's run to the quarter final in successive Top14 seasons, Arous was finally called up to the French squad in November 2012, aged just 22.

He didn't make his debut for the first team until the following year, playing against New Zealand in a 24-9 defeat. His form continued to improve over the course of the 2014/15 season, culminating in a call up to the French Rugby World Cup in 2015.

He made his 6 Nations debut off the bench in round 1 against Scotland in Paris in 2015, and made his first test start against Ireland in the following round. He appeared in all five of France's games at RWC 2015 as well as the last two warm up games against England and Scotland.

Having won 14 caps for France, he missed the opening two rounds of the 2017 Six Nations through injury.

Following his recovery, Arous was included in France's matchday 23 to face Italy and Wales.

He was named in the France squad for the three-match test series against South Africa in June 2017.

The powerful front rower was later included in French's squad for the 2018 Six Nations tournament, having made 19 appearances for the national side.

He added Test one cap to his tally in 2018 before helping Racing 92 to the Champions Cup Final.

He was included in France's squad to tour New Zealand in June 2018 but was forced to withdraw through injury.