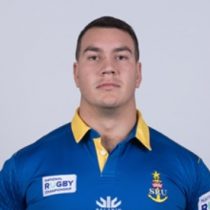 Craig was part of the NSW Waratahs Gen Blue squad in 2015 and 2016, and played for NSW in the Australian Super Under 20s Championship in both years.

In 2016, he was called into the Australian Under 20’s side for the World Rugby U20's Championships in Manchester, England, where he played in Tests against Scotland and NZ.

Craig has played all of his club rugby in colts and grade for Eastwood in the Shute Shield competition in Sydney. He started playing in Eastwood colts 1st XV while still at school in 2014, and again in 2015, and then moved into Grade at the age of 20. He initially played in both 1st and 2nd Grade behind Eastwood’s two contracted Waratah Super Rugby hookers Hugh Roach and Damien Fitzpatrick in 2016, 2017 and 2018.

In 2019 Craig played every game for Eastwood’s 1st Grade side, coming second in the Shute Shield Club Championship and losing to Warringah in the semi-final. Craig was named Eastwood Rugby Club’s ‘Rookie of the Year’ in 2017, played in the Shute Shield second grade Grand Final in 2018, and named in Eastwood's 'All Stars' team in 2018. By the end of round 6 in 2019, he had made the sixth most tackles (71) of any player in the Shute Shield competition.

His was selected for the Greater Sydney Rams in the National Rugby Competition (NRC) in 2017 and the new Sydney NRC team in 2019. His performance in the 2019 NRC competition was featured on the Waratahs news feed at the end of round 6, highlighting 2 tries, 66 tackles (4th highest for any player), 6 turnovers, 30 carries, 3 clean breaks and a 90% success rate in lineouts. Craig has played in 52 first grade games for Eastwood (at end 2019 season) scoring 14 tries (70 points).

Craig experienced a remarkable 2020, beginning this year as a teacher at Sydney’s Barker College, before making a surprise Super Rugby debut for the Queensland Reds in Round 5 of the former Super Rugby competition, against the Japanese Sunwolves at Suncorp Stadium.