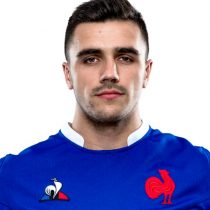 Originally from Annemasse in Haute-Savoie where he started at U9, Cretin showed promise at the age of 16 and was picked up by Lyon's Academy after missing out in Grenoble.

Part of Lyon's golden generation of Academy products, Cretin broke into the Lyon senior squad along with the likes of Baptiste Couiloud, Félix Lambey and Thibaut Regard.

A physical French blindside flanker, he has an uncompromising approach to the game.

He was part of the France u20 squad in 2017 and 2018 where they managed to achieve the U20 World Championship and Six Nations double in the latter year.

His first senior season with Lyon provided 7 caps for the young back-rower, with the majority of them coming in the Challenge Cup & two in the TOP14.

His second season was far more successful as he featured in all but 7 games for Lyon amassing 27 appearances for the club.

Described as a natural leader by his coaches, Cretin entered his third senior season with the club (2019/20) and further produced on his promising talent.

In January 2020, he was included in France's squad to prepare for the Six Nations where he looked to make his test debut.

Cretin picked up an injury a week before the Six Nations kicked off and was replaced in the squad.