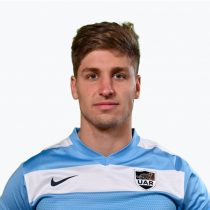 Blessed with slick skills, pace to burn and a brilliant understanding of the game Domingo Miotti is one of rugby's brightest prospects.

The early stages of Miotti's career was full of roadblocks after he came to prominence in the 2016 World Under-20s Championship in England, where his tactical control and steady kicking helped guide the Pumitas to third place – their best-ever finish at the time.

That squad was brimming with talent containing the likes of Marcos Kremer, Bautista Delguy and Juan Cruz Mallia who all went on to represent the national side in their early 20s. However, while those aforementioned players made the step up to Super Rugby and Argentina, disaster struck Miotti as he ruptured his cruciate ligament, which kept him out for nine months.

Since coming back from injury, he’s bided his time patiently and was rewarded by making the Jaguares’ pre-season squad in the lead-up to the 2019 season. Miotti bided his time and waited for his opportunity with Santiago Gonzalez Iglesias and Joaquin Diaz Bonilla dominating the first two flyhalf slots in the Jaguares squad.

Miotti had to wait until round 8 of Super Rugby to make his mark and April 6 2019, is the day he will never forget, as he produced the arguably the most incredible Super Rugby debut since the competition’s inception.

Coming off the bench with the Jaguares down 20-10 to the Bulls, his two tries and one conversion in three minutes almost single-handedly clinched a game the Jaguares should not have won.

His performance led to further opportunities in the squad as he helped the Argentine side to their first ever Super Rugby Final against the Crusaders, where he came off the bench in the 19-3 loss. His stellar start to his Super Rugby career led to an inclusion the Los Pumas' Rugby Championship squad where he will look to make his test debut and perhaps earn a place in the squad for Rugby World Cup in Japan.

Miotti didn't make his debut in 2019 but did a year later during the 2020 Tri Nations where he came off the bench in Argentina's 16 all draw with Australia. In December 2020, he signed a deal to join the Melbourne Rebels for the 2020 Super Rugby season.