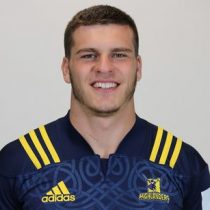 Hunt hails from the North Shore and went to Westlake Boys' High School before heading to the University of Otago.

Hunt's ride into the Highlanders is all the more surprising because when he first arrived in Dunedin he took a while to get noticed.

Six months ago, Hunt was just contemplating a bit of study, a holiday and getting ready for the club season with University.

Now he finds himself knee deep in the professional game, running out in front of thousands of fans and mixing with some of the game's greats.

He was just expecting to come into the Varsity set-up. But with a build up of injuries in his position, Hunt has managed to get a chance, enjoying a full pre-season with the Highlanders.

Hunt has benefited from the long list of injured openside flanker's. Hunt made his Super Rugby debut coming off the bench against the Blues at Eden Park on March 11.

Since then he has started the next four games, getting through plenty of action and helping the Highlanders back into the winning circle.

Hunt finished the Super Rugby season with 10 caps scoring 2 tries and started the match against the British and Irish Lions.

Hunt was one of Otago's stand out performers during the 2017 Mitre 10 Cup was named as one five additional players in the All Blacks touring squad, meaning he will be available for selection against the Barbarians and will return to the squad for the French leg of the tour.

Hunt was one of the top tacklers during the 2018 Super Rugby season making 188 tackles in 14 games and has moved North Harbour for the 2018 Mitre 10 Cup season.

He will be looking to build onto these strong performances in the 2020 Super Rugby and add many to his standalone New Zealand cap.