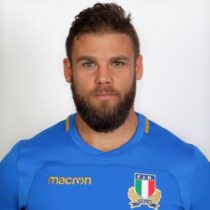 Budd is a physically very strong individual originally from the rugby haven New Zealand. He was born in Whangarei (New Zealand).

He loves to run with the ball in hand a fierce defender. Budd played in the Provincial Championship New Zealand NPC with the shirt of Northland, while also training with the Auckland Blues in the Super Rugby.

Also suitable as a second row, the lock is a good jumper and is famous for his fancy offloads. He comes from the NEC Green Rockets, a team of Japanese Championship before joining Benetton in the season 2012/2013.

In April 2017, Budd signed a contract renewal with Treviso for the 2017/18 season and acquired the captaincy role.

In July 2018, after 103 appearances for Treviso, Budd was named captain of the side for the second consecutive year.