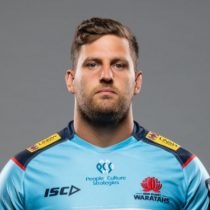 Porecki is an Austrialian born hooker who has represented the Waratahs and Sydney side Manly Marlins.

Porecki signed for Saracens in 2015 as cover for Jamie George and Schalk Britz who were expected to be on international duty at the World Cup.

He signed for London Irish in the summer of 2016 and made an immediate impression on the club. A promising hooker, Dave played 16 times for Irish during their Championship winning season.

In November 2017, Porecki committed his future to London Irish bringing considerable experience to the Exiles' pack.