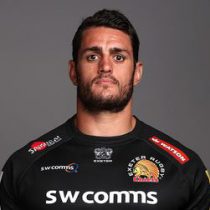 A former Richmond High School student, Dave Dennis represented the Australian Schoolboys team in 2004. Dennis' Waratahs debut was against the Crusaders, in 2007 and by 2009 he was called into the Wallabies squad.


His strong form in 2011 saw him again selected in the Wallaby squad and while not a member of the final 30-man RWC 2011 squad, he was one of a select group of players to train-on throughout the Tournament. His reward was a place on the Spring Tour to the UK, where he started in non-cap XV that defeated the Barbarians by 60-11 at Twickenham.

A hard-hitting lock/ back-rower, Dennis continued to impress for the Waratahs with his forming being rewarded with a test debut in 2012. He took over the Waratahs' captaincy when Dean Mumm left the Waratahs in 2012.

Dennis sealed his move to Exeter Chiefs for the 2016/17 season, having joined from NSW Waratahs. The all-action forward, is equally at home either at lock or in the back-row, penned a three-year deal with the Premiership club. Capped 18 times by the Wallabies, Dennis is another significant addition to the Chiefs ranks.

The former Wallaby played 107 Super Rugby games for the Waratahs scoring 20 tries. In a fantastic first year at the Chiefs, Dennis made 25 appearances in total, including featuring in the club’s Premiership Final victory over Wasps at Twickenham.

In March 2019, Rob Baxter confirmed Dennis had agreed a new two-year deal with the club and at the beginning of the 2019/20 season he had 64 appearances for the Chiefs. Despite signing through to the end of the 2020/21 season, Dennis confirmed that he was granted an early release from the Chiefs after helping the side to the Premiership and Champions Cup double. In doing so he joined an illustrious club of players to win both the Champions Cup and Super Rugby.