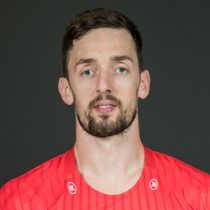 Darren Sweetnam is widely known in Cork for his hurling credentials having played with club side Dohenys GAA and lining out for the Cork Senior Hurlers in the Allianz League and the Championship in 2012. He also represented Ireland in hockey at U16s.

Sweetnam has developed into a well rounded winger bringing in a number of skills from his previous sports. A graduate of the Munster Rugby Academy, Sweetnam joined the provincial set-up at the start of the 2012/13 season after impressing for Munster U20s in the Interprovincial series.

He commenced his rugby career with Dunmanway RFC, before making the move to senior club side UCC for season 2012/13. His involvement in the Irish U20s 6 Nation's campaign was his first representation at national age-grade rugby and he made 4 appearances including his first start against Italy. He then joined the U20s at the JWC in France and scored two tries on his first outing against Fiji.

Sweetnam also made his Munster A debut in the B&I Cup against Plymouth Albion in January 2013. He played for a Munster 7’s side at the Limerick World Club 7s Festival in Thomond Park, August 2014 and represented the Munster senior team in pre-season action, August 2014 - away to Gloucester and a week later in the SEAT Challenge against London Irish at the Waterford RSC.

He made his league debut against Cardiff Blues in Irish Independent Park, February 2015 and joined the senior ranks in Season 2015/16, signing a new two-year contract, moving to development status for 2015/16 and a full contract for 2016/17.

His season action commenced against Zebre in January 2016 with his first start for the province, and such was the impression the Dunmanway-native made that he went on to keep his place for the next 6 games scoring his first try against Cardiff Blues in March.

Sweetnam's career continued on an upward trajectory in 2016/17, scoring 7 tries in 25 appearances, including a wonderful solo effort in Munster's win over the Maori All Blacks in November. He was also the only player to start the first 15 games of the season.

Sweetnam was named the Young Player of the Year at the 2017 Munster Rugby Awards and signed a new deal in January 2017 that will see him remain at the province until at least June 2019. He earned his test debut against South Africa in November 2017 and scored his first international try on his first start against Fiji later that month. He ended the 2017/18 campaign with 23 appearances and four tries to his name.

An outstanding start to the 2018/19 campaign saw Sweetnam awarded Man of the Match in the PRO14 opener against Cheetahs and start eight of Munster's first nine games, scoring two tries.

He earned his thrid Ireland cap against the USA and signed a two-year contract extension in December 2018, committing to the province until at least June 2021.