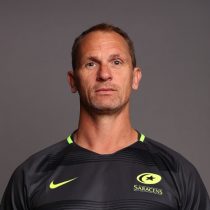 A former Manly and Waratahs full-back, Dan Vickers has been a long time member of the Saracens' backroom staff.

Vickers currently holds the position as the side's transition to kicking coach.

He switched to his current position under Brendan Venter and has worked with and developed international stars such as Owen Farrell, Charlie Hodgson, Ben Spencer and Richard Wigglesworth.

The Australian arrived in north London in 2006 having been a part of Bath Rugby’s medical team. working as a physiotherapist.

As well as kicking technique and tactics, Vickers’ role includes work under the high ball as demonstrated by Liam Williams in the 2018/19 Premiership final.