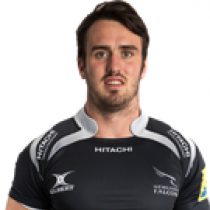 Temm originally moved to the UK from New Zealand to play cricket, but began playing rugby for Old Crossleyans.

After two seasons he moved to National Two North side Otley and while playing there he was spotted by Falcons.

During his time with the Falcons, Temm played for Tynedale as a dual registration player and twice played for them against Ealing Trailfinders in National 1 in 2014-15.

He has also been with the Geordies for three seasons, playing 22 times for them and scoring two tries, also captaining their 7s team.

Temm's form in the shortened form of the sport caught the eye of the England 7s selectors and he has played for England on the HSBC World 7s Series.

In May 2017, it was announced that Temm will join Ealing Trailfinders from Newcastle Falcons.