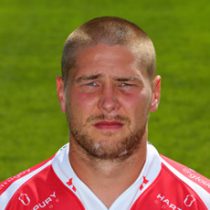 Born in Wales in August of 1986, George is a dynamic hooker who has represented Wales all throughout the age grades from Under 16 to Under 21s. Having played for the Scarlets in the early stages of his career, George moved to London and took up a contract with London Welsh where he spent three seasons. In the summer of 2013 it was announced George had been signed by Gloucester.

George left Gloucester in 2014 and moved to National One side Blackheath.

In 2016, Bedford Blues snapped up George from National One side Blackheath in November following a mini injury crisis at Goldington Road.

George signed for London Scottish from Bedford Blues for the 2017/18 season.

Dan George will form part of the coaching team alongside Dave Morris and Jake Sharp, whilst also playing at hooker during the 17/18 season.

The 30-year-old joined Bedford from Blackheath and has also played for Gloucester, Worcester Warriors and London Welsh, with plenty of experience on offer.