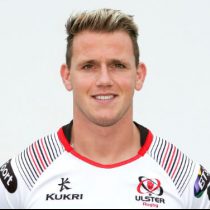 Gilroy is one of the most exciting and dynamic young players in Ireland. His preferred position is on the wing but he is equally adept at full-back or centre.

After a successful school career winning 2 Schools’ Cups with Methody and representing both Ulster and Ireland Schools, he entered the Ulster Academy. Gilroy’s first season for Ulster, 2010/2011, saw him amass an impressive 8 tries.

Gilroy marked his Ireland debut with a try against Argentina in November 2012 and made appearances in the RBS 6 Nations in 2013, making his debut against Wales in the opening game.

He gained only 1 cap in a three and a half year spell until returning for the tour to South Africa last summer playing in the first 2 tests.

Gilroy was named in the Ireland squad for the opening two rounds of the 2017 6 Nations Championship.

He became the youngest Ulster player to reach the 100 and 150 cap milestones having scored 57 tries in 158 appearances.

In February 2018, Gilroy signed a contract extension with Ulster that will see him stay at the club until 2021.

In September 2018 he became Ulster's top try-scorer in Celtic League history when he scored his 51st try versus Edinburgh.

By the beginning of the 2019-20 season, Gilroy became Ulster’s most-capped player in the senior squad.