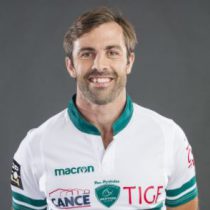 Affectionately known as "The Snake" by team mates Conrad Smith is a throw back to the centres of old. Slightly built for a modern day centre, Smith possesses an eye for the gap unlike many others in the game today, frequently being seen ghosting past defences with ease. His quality handling and kicking game make him the complete attacker, frequently creating space for wingers around him.

During his schoolboy career Smith played halfback at Francis Douglas Memorial College and represented Taranaki. After school, Smith attended Old Boys University where he made the move into the midfield before making his NPC debut for Wellington in 2003.

Having been previously a provincial grade cricket player Smith broke into the Hurricanes side in 2003 before becoming an All Black the following year in 2004. In 2011 he was an integral part of the 2011 World Cup winning side. His inspirational captaincy of the Hurricanes in 2014 was an integral part of the team’s renaissance, along with his robust defence and ability to put his teammates into space. In February 2015 he announced that the 2015 Super Rugby season would be his last as he would be joining Pau on a two-year contract.

He starred for the All Blacks during the 2015 Rugby World Cup as New Zealand went on to become the first nation to win back to back Rugby World Cups.

Smith made his debut for Pau on 19 December 2015 in the European Rugby Challenge Cup Pool 2 match against Welsh side Newport Gwent Dragons.

In 2017, Smith confirmed that he would be retiring at the conclusion of the 2017/18 season having played 94 Tests at centre for the All Blacks, 43 games for Wellington, 126 games for the Hurricanes and 52 for Pau.

In July 2018, seven weeks after his retirement, the All Black legend confirmed that he had joined Pau's coaching staff.