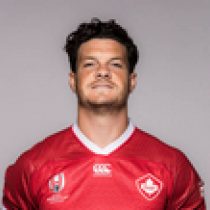 A reliable player for Canada over the years in both the Sevens and Fifteens forms of the game, Hearn is a powerful yet fast-footed back who also possesses a strong boot, particularly with restarts. Hearn is hugely experienced for club and country, making his Test debut in November 2008 against Ireland.

He was a member of the Canadian 2011 World Cup squad and is set to add to his World Cup appearances in 2015 having been again selected for the Canadian national squad.

Featuring in every match for the Maple Leaf at 2015 Rugby World Cup. Soon after the World Cup ended he announced that he would join Premiership side, London Irish, for the remainder of the 2015/2016 season.

Hearn, who can play at either centre or on the wing, has made 23 appearances for the Exiles since joining the club in 2015.

With 53 Canada caps to his name, Hearn’s experience, physicality and high skill level have all contributed to the Exiles’ record-breaking winning streak.

Hearn’s international exploits have continued this autumn with test match outings against Ireland, Romania and Samoa in 2016.

The versatile back, who is also adept on the wing, scored the opening try of the 2016/17 Championship Play-off Final second leg as Irish secured their top-flight status in style.

London Irish got relegated for the 2018/19 season but Hearn helped the side regain their Premiership status for the 2019/20 season.

He has been included in the 2019 Pacific Nations Cup with 21 test caps.