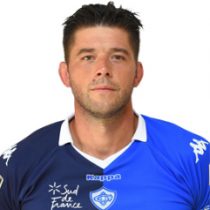 A huge man, standing at over six foot six inches, Samson is aesthetically the ideal lock. After humble beginnings with La Rochelle in D2 he moved to Clermont in 2007.

Clermont made over 50 appearances for the club between 2007 and 2010 before he joined Toulon.

The powerful second rower notched up 47 appearances for Toulon and earned his place in the France touring squad to Argentina in 2012, where he made his test debut.

He also won a TOP14 title with Toulon before making the switch to Castres, where he would win a further two TOP14 titles in 2013 and 2018.

At the end of the 2018/19 season, Samson looks to be heading towards retirement but will feature for Castres during the World Cup despite not being offered a full time contract for the season.