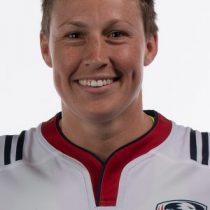 Christiane Pheil picked up rugby when she was 20 years old and a DI Tennis player at the University of Colorado. After playing years of tennis, she wanted to try something completely new and immediately turned her attention to rugby. Along with tennis, Pheil ran track and cross country in high school and was a State Champion in pole vaulting.

In 2009, Pheil attended a sevens development camp where she was identified by national team coaches and made her debut with the senior Women's Sevens at the 2009 Dubai Sevens tournament. From there, she earned Collegiate All-American honors in 2010, 2011 and 2012. Pheil ultimately transitioned to Penn State where she won two national championships in rugby alongside a 2016 D1 Coach of the Year honor for her work with her senior club team.

That same year (2016) Pheil earned her first cap with the U.S. Women's National Team 15s against France and was selected for Women's Rugby World Cup 2017 the following year.