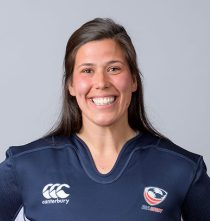 Charli Jacoby picked up rugby at age 20 while cheerleading at Kent State. A few rugby players approached her at cheerleading practice and told her she'd be great in a scrum so she gave it a shot and has been hooked ever since. As a competitive cheerleader in high school and college, Jacoby took 5th place at the NCA Championships before exploding on the rugby scene.

In rugby she's joined the Midwest Thunderbirds for their Wales and Ireland tours, has been selected for the WPL All-Stars and WPL Dream Team in 2018 and 2019. Jacoby is Captain of Chicago North Shore and Head Coach of the U24 Illinois Collegiate All-Stars.

In 2019, Jacobi was selected as a reserve for the U.S. Women's National Team 15s historic matchup (uncapped) with Barbarian F.C.

She owns a Bachelor's Degree in English, a Masters in Education and is a 3rd-grade teacher.

She was named on the bench to make her debut against England in the 2019 Women’s Rugby Super Series.