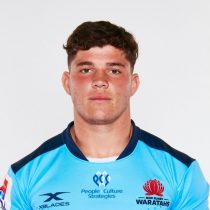 Australia has a history of producing world-class openside flankers and after a bright start to his career, Carlo Tizzano looks as if he will be yet another world-class flanker from Down Under.

Tizzano was a schoolboy prodigy and right after school he played open grade rugby for the University of WA in the Fortescue Premier Grade. He not only competed amongst the men, but remarkably Tizzano was also voted the competition’s best-and-fairest player and he was then drafted into the Force’s NRC side.

The nuggety flanker starred on the Australian Schoolboys and under 18s tour of Scotland and Ireland in 2018 having missed the tour in 2017 due to injury. He also represented the Junior Wallabies in 2019, helping the side reach the final which they narrowly lost to France.

At the end of 2019, Tizzano signed with the Waratahs, he arrives off a stellar campaign in the 2019 NRC season.

He starred in pre-season with the club before earning his Super Rugby debut against the Crusaders in 2020.