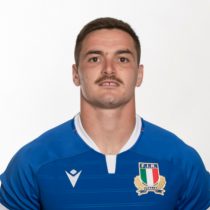 Carlo Canna is one of the up and coming crop of Italian rugby players making a name on the international stage. Beginning at the Fiamme Oro Rugby club, Canna secured a move to Zebre in 2015. Primarily a fly half, he can also line out at 12.

On the international scene, Canna made a name for himself in the Emerging Italy set up in 2013, played for Emerging Italy in the Tbilisi Cup in 2014, scoring a try on his debut against Spain, then started all three games in the same tournament the following year, scoring 16 points against Georgia and another 13 against Uruguay.

That lead to a call up for the national side in 2015. On 24 August 2015, he was named in the final 31-man squad for the 2015 Rugby World Cup. Made his test debut in a world cup warm up game against Scotland in Turin, and came off the bench in all four of Italy's pool games at RWC2015.

Made a memorable RBS 6 Nations debut last year in Paris becoming only the second player to score a "full house" on his first Championship game. Injury the next round against England in Rome ended his campaign and run of 9 successive caps.

Canna, who arrived at Zebre in 2015, renewed his contract with the club until at least June 2019.

The fly-half has enjoyed a fine run of form for Zebre during the 2017/18 season and was included in Italy's 2018 Six Nations squad where he would add to his 25 test caps.

His impressive displays secured his spot in the national squad for the 2019 edition of the tournament with 11 previous 6 Nations appearances and 82 points scored.