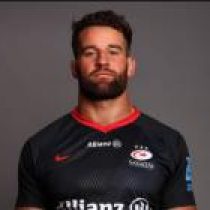 Born in Stockton-on-Tees, in Newcastle, England, Clark attended the rugby breeding ground that is Barnard Castle and began his rugby career with Leeds in 2006 having come through the academy at the club.

In 2010 Clark moved to Northampton Saints and despite many significant strides in his career, was banned for 32 weeks in 2012 for intentionally breaking the arm of Leicester Tigers hooker Rob Hawkins.

He arrived in the East Midlands from Leeds Carnegie in 2010 and played over 100 times for the Saints. During his first season at the Club, at the age of just 21, Calum led the Saints against Saracens in the LV= Cup and was named Young Player of the Season for 2010/11 having started both the Heineken Cup final and Aviva Premiership semi-final.

Clark skippered England Saxons in the 2013/14 season against Irish Wolfhounds and was included in the Elite Playing Squad ahead of the 2015 Rugby World Cup. He went from strength to strength, winning three Player of the Month awards in 2014/15 and sweeping the board at the End of Season Awards.

He went from strength to strength, winning three Player of the Month awards in 2014/15 and sweeping the board at the End of Season Awards.

The North East-born Clark joined Saracens in the summer of 2017, making his first appearance against Sale Sharks.

His constant incredible stunts lead to a three-year Saracens deal from the 2017/18 season.

Clark helped Saracens claim a Premiership during the 2018/19 season and went into the 2019/20 Champions Cup with 55 European caps.

2011 Young Player of the Season