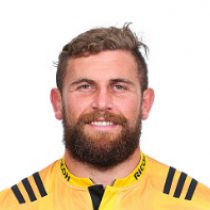 Gibbins moved to Palmerston North in 2007 to study for a Bachelor of Sport and Exercise at Massey University and made his Manawatu Turbos debut in 2009 against Wellington.

He was named in the Hurricanes Wider Training Group for the 2013 Super Rugby season.

In 2015, Gibbins signed a full contract to be in the Hurricanes first team squad after two years in the Wider Training Group.

He then extended his Hurricanes contract to the end of the 2016 season.

Gibbins was the captain of Manawatu Turbos, where he played under incoming Glasgow Warriors coaches Dave Rennie and Jason O’Halloran, and he has scored 19 tries in 60 appearances for the Mitre 10 Cup side.

The 28-year-old, who plays for the Hurricanes, was a Super Rugby winner with the Wellington side last year. The open-side has played 26 times in Super Rugby and has scored three tries.

Glasgow Warriors signed New Zealand-born flanker Gibbins ahead of the 2017/18 season, subject to visa and medical. Gibbins signed a three-year contract keeping him at Scotstoun until at least May 2020.