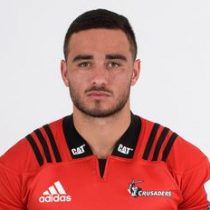 Bryn Hall represents North Harbour in the ITM Cup, having made his debut during the 2012 season, and also plays for the Blues in Super Rugby from 2013.

Hall was born in Auckland and educated at St Peter's College where he also played in the school 1st XV.

Hall has captained many of the teams he has played for, including his St Peter's College First XV, co-captain of the New Zealand Under-20 side, and North Harbou

A broken foot saw him miss another season of Super Rugby in 2015, but he returned for the Blues in 2016 as the first choice halfback and played in every game.

He signed for the Crusaders' 2017 Super Rugby season, with his move helping fill the gap left by Andy Ellis' decision to retire at the end of this season.

In the 2017 Super Rugby campaign, the diminutive scrum-half has played 13 games for the Crusaders and has weighed in with a further three tries.

Following a number of stand out games in Super Rugby and Mitre 10 he earned an All Black call up for the Japan leg of the November Tests, but unfortunately didnt get on the field.

Hall, selected for the Crusaders squad ahead of the 2020 Super Rugby season, has obtained 84 caps.