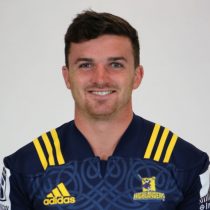 Gatland debuted for the Mooloos at ITM Cup level in 2015 before spending several years in the Waikato.

He was part of the Blues development side during the 2016 Super Rugby season, returning to the city of sails where he previously played for a Blues Schools side back in 2013.

Joining North Harbour in the 2016 season from Waikato, he helped North Harbour win the Mitre 10 Cup Premiership title with a late drop goal against Otago in Dunedin.

In 2016 he was called into the squad as temporary injury cover when the Crusaders lost Richie Mo’unga for eight weeks with a broken hand.

Gatland was called into the Blues squad early in the 2017 Super Rugby season as injury cover for Piers Francis and Ihaia West.

Gatland faced his father's side, the British and Irish Lions, when he represented the Provincial Barbarians side against the Lions in their tour opener in Whangarei on June 3.

In May 2018, he signed a two-year deal with the Highlanders as the squad was looking to replace Lima Sopoaga, who left for the U.K.

Gatland's first season with the Highlanders was cut short after he broke his leg against the Sunwolves.

2020 will be a big year for Gatland who has some stiff competition for the all important 10 jersey.