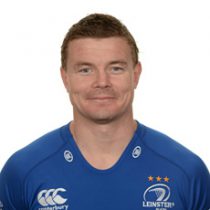 Brian Gerard O'Driscoll is one of the most dynamic players to have ever played rugby. He was captain of the Ireland Rugby team from 2003 to 2012 and captained Leinster Rugby until the start of 2008 season. Registered at University College Dublin RFC, he plays at outside centre for the Irish provincial team Leinster.

O'Driscoll was chosen as Player of the Tournament in the 2006, 2007 and 2009 RBS Six Nations Championships.

Widely regarded as one of the best centres to have ever step foot on a rugby field, O'Driscoll is now Ireland's most capped player at test level after surpassing long-time friend Ronan O'Gara in the 2013 Six Nations tournament. The UCD graduate also holds the accolade of being the highest scoring centre in the entire game's history.

Brian played his last game for Ireland after 15 years against France in the final game of the 6 Nations 2014, ending his international career on a high note by winning the 6 Nations.

In November 2016, Brian was inducted into the World Rugby Hall of Fame, the former Leinster and Ireland centre won 141 international caps during an illustrious 15 year career.

World Rugby Player of the Decade 2010