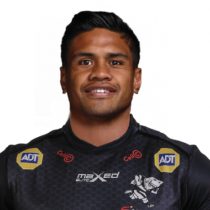 In his first year with a fulltime Reds contract during 2011, Ben played 10 of the Reds 18 games during the Championship season, highlighted by a defining moment in the semi-final when he snared a low pass from Quade Cooper to score a momentum-changing try in the right-hand corner.

Such was the remarkable rise of Ben that his stiff defence, straight ball running and accurate left boot were recognised through winning the Reds 2011 Most Improved Player of the Year Award before he was rewarded with selection in the Australian Barbarians squad, where he impressed in their victory over Canada.

Ben enjoyed a magical start to his professional Rugby career when, in his debut for the Reds in 2009 off the bench against the Crusaders in Christchurch, he scored a try with his first touch of the ball.

After a single season with the Western Force, the club confirmed that it has released Ben from his contract a year early to continue his career with English club, Bath Rugby.

Tapuai, who played Super Rugby for Western Force and the Reds and has won seven caps for the Wallabies, left Bath at the end of the 2017 season to join Harlequins.

The Australian centre has played 40 times for the Blue, Black and White, scoring four times.

On 6 March 2018, Tapuai agreed a deal to join Premiership rivals Harlequins from the 2018-19 season having left the Western Force to join Bath the season before.

He was a regular starter for his side with over 1500 playing minutes in his 18/19 season.

Tapuai went on to play on 30 occasions for Harlequins in the Premiership including an appearance off the bench as Quins beat Exeter 40-38 in the highest scoring Premiership final ever.

Following the success of the 2020/21 season with Quins, Tapuai signed a deal to join the Durban-based Sharks.