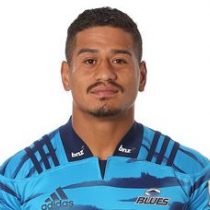 Pulu is an old boy of Wesley College, breeding ground for many a great rugby player.

Augustine Pulu was part of the Chiefs wider training squad during the 2012 season, but injury saw him called into the side where he capitalised on his opportunities and earned an early Chiefs contract for the 2013 season.

He was instrumental in Counties Manukau’s ITM Cup Championship win in 2012 and was awarded Player of the Day in the final. Pulu is a talented young player with a bright future and great agility with the ball in hand.

Pulu has played for the New Zealand 7s side and was called into the All Blacks squad as injury cover for Tawera Kerr-Barlow, he has represented the All Blacks on 2 occasions so far debuting against USA in 2014.

Having played 51 Super Rugby matches for the Chiefs, Pulu joined the Blues ahead of the 2017 season after playing back up to Kerr-Barlow for many years, the nippy scrum-half's switch has paid off as he has secured regular game-time in Auckland for the Blues.

Ahead of Super Rugby 2018, Augustine has played 65 times in Super Rugby scoring 11 tries. Pulu has been as the Blues captain for the 2018 Super Rugby season.

Injuries hampered the Blues captain's season as he featured in 9 of the Blues 16 matches.

Pulu will feature in the Japanese Top League during the Super Rugby offseason.