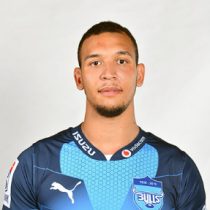 Second rower Aston Fortuin showed early promise as he represented Border at the U16 Grant Khomo Week in 2012.

He then moved Southdowns College in Pretoria and was selected for the Blue Bulls at Craven Week and earned a spot in the South African Schoolboys squad in 2014.

His first year out of school Fortuin represented the Bulls u21 side.

In 2016 he was named in the Tuks Varsity Cup squad and was called into the Bulls Currie Cup squad.

He once again represented Tuks during the 2017 Varsity Cup before being named the Bulls Currie Cup squad, where he stamped his mark on the competition and earned a spot in the Bulls 2018 Super Rugby squad.

Fortuin joined the Kings in 2019 before joining the Sharks on a short-term deal in 2020 ahead of his move to the MLR where he joins Utah Warriors.