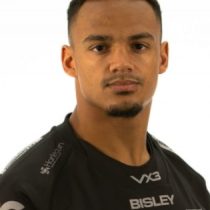 One of the most potent and profilic finishers in Welsh rugby with his electric pace and powerful running, Ashton Hewitt has quickly made his mark in Wales.

Hewitt is a product of the Newport Gwent Dragons academy. He has come up through the age grades playing for both the U16s and U18s whilst also making appearances for Premiership teams Newport RFC and Cross Keys.

The wing also has caps from Wales U20s and made his international age grade debut against Ireland U20s in February 2013. He made his debut for the Welsh Region in the LV=Cup against the Scarlets in November 2013.

After impressive performances for the Dragons, Hewitt earned a senior National call up for the 2017 Six Nations before a concussion denied him an appearance and then a shoulder injury forcing him to withdraw from the summer tour in 2018.

Ashton Hewitt – one of the most exciting talents in Welsh rugby – committed his future to Dragons by signing a new contract at the region in the summer of 2019 after scoring 21 tries in 72 appearances for Dragons, Hewitt signed a deal to stay at Rodney Parade until at least 2021.

In November 2019, he was named in Wales 35-man squad that would face Barbarians as one of 5 uncapped players.