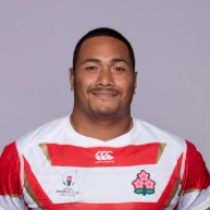 He cemented his place in the 31-man squad for the 2019 Rugby World Cup and went into the quarter-finals of the tournament with 13 caps for Japan.