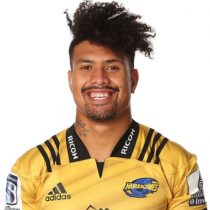 Savea was a member of the Rongotai College 1st XV, captain of the side in his final year of high school.

Ardie Savea plays as a flanker for Wellington in the ITM Cup. Younger brother of All Black winger Julian, the loose forward was a member of the Rongotai College 1st XV , and has also represented New Zealand on the international sevens circuit.

In 2013 Super Rugby season he joined the Hurricanes after signing a two-year deal. Later that year, Savea traveled with the All Blacks to Europe, along with his older brother Julian. This was because All Blacks coach Steve Hansen "wanted to introduce him to the way of the All Black life." Savea joined up with the NZ 7's squad with an eye on Rio Olympics but opted to focus solely on 15's with hopes of earning an All Black cap.

Savea has previously Captained Wellington and also previously played for the Barbarian F.C., for the New Zealand U20's team and international Rugby Sevens, for New Zealand.

In May 2016, he was one of the players dropped by the Hurricanes following a late night out and breaking the curfew. Regardless of that, he had such an impressive season with the Hurricanes he earned a call up to the All Blacks in June that year and made his first cap against Wales.

Savea came off the bench in all three of the All Blacks matches against the British and Irish Lions in 2017.

Savea had an outstanding 2018 which drew the interest from a number of European clubs but in December 2018 he signed his second deal of the year with the Hurricanes and NZRU.

Since his Hurricanes debut in 2013, he has made 75 Super Rugby appearances, scoring an impressive 17 tries.He has also played 35 tests for the All Blacks since making his debut against Wales in 2016.

Ahead of the 2020 Super Rugby season, Savea has obtained 91 caps.