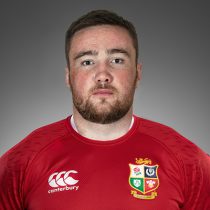 Zander Fagerson is a product of the High School of Dundee and Strathallan and after coming through the Scottish Rugby Academy system signed his first professional contract with the Warriors in March 2015.

He was named part of Scotland's 2016 Six Nations squad and made his debut against England at Murrayfield as a replacement. Fagerson was the fourth-youngest prop in Scottish history to be capped for the country and, at the age of 20, became the youngest player to represent Scotland for more than half a century.

The tight-head prop made his Warriors debut in 2015 and went on to play 85 times for the club before signing a new deal that will keep him at Glasgow until at least 2022. Fagerson has been almost ever-present since and is now joined in the Scotland team by younger brother Matt, the pair becoming 22nd set of Scotland brothers to play together in the same Test in 2018.

May 2019 saw him being named in Scotland's 42-man training squad for the 2019 Rugby World Cup. From the 2019-20 season Fagerson was named assistant coach at Glasgow High Kelvinside.

He has racked up 38 Test caps since becoming the fourth youngest Scottish prop in history – and youngest since 1948 – when he made his Test debut aged 20 in 2016. He has started 12 of the last 14 Scotland Tests and has two Test tries to his name, including one at the 2019 World Cup against Japan.

After a long battle with WP Nel for the starting tighthead role with Scotland, Fagerson has now cemented his position as the first choice in Gregor Townsend’s side. He was outstanding in Scotland’s first win at Twickenham since 1983 to kick off the 2021 Guinness Six Nations, but a red card against Wales stalled his progress. Fagerson finished strongly, playing an important role in the final win in Paris – a first for Scotland since 1999.

One of the first names on Scotland’s teamsheet, tighthead prop Zander Fagerson has been chosen for his maiden British & Irish Lions Tour to South Africa.

He made his B&I Lions debut in the opening tour game against the Lions after missing the Japan game through injury. He played twice more on tour before the test series.

In July 2021, he signed a contract extension with Glasgow Warriors.