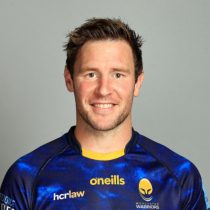 Hailing from Kettering, England, Chudley is a lively scrumhalf who is fast developing into a quality nine.

His professional career began at the Bedford Blues before moving onto Newcastle Falcons under the tutelage of Alan Tait.

Just a year into his contract, Chudley left the Falcons to take up with the Exeter Chiefs in the Premiership. The scrum-half made over 115 appearances for the Premiership champions since his arrival from Newcastle Falcons in 2012, scoring 15 tries.

Chudley then made more than 100 appearances for Exeter Chiefs in six years at Sandy Park and was a key member of the side that won the Premiership for the first time in 2017.

In March 2018, Bath Rugby confirmed the signing of Chudley, who joined the Club ahead of the 2018/19 season.

Chudley has played more than 130 Premiership matches in an illustrious ten-year career at the top level in England having first been recruited by Newcastle Falcons after he impressed playing for Bedford Blues against Warriors in the Championship semi-finals at Sixways in 2011.

In February 2021, Warriors confirmed that Chudley had signed Chudley ahead of the 2021/22 season.