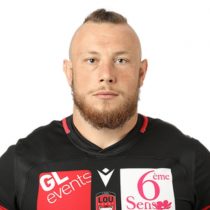 Somewhat of a late bloomer, Vivien Devisme trained at the Colomiers and Perpignan Academies but only made his breakthrough when featuring for Soyaux Angoulême in Federal 1.

The side gained promotion at the end of the 2015/2016 season, with his form catching the attention of Brive who signed the front rower ahead of the 2016/17 season.

He was an instant hit making 22 appearances for the side and became a regular starter when the side was relegated to the PROD2.

Brive regained promotion to the Top 14 but Devisme decided to sign for Lyon for the 2019/20 season.