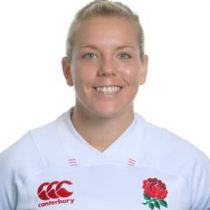 When her dad made her take part at home town club Portsmouth from the age of five to ten, Cornborough carried on playing the game, moving to the girls’ game before joining Richmond at 18.

She represented England at U19 and U20 level and was in the U20 Nations Cup winning team in 2008 and 2009 and played in nine of England’s 10 Test matches in 2015, missing only the Six Nations game against Ireland.

Vickii was a member of the 2017 Women's Rugby World Cup squad and featured in every game in Ireland, including the final against New Zealand.


In 2018 Cornborough continued her impressive consistency – appearing in all five Six Nations games as the Red Roses ended up second in the standings as well as all three winning Quilter Internationals.

She was awarded a full-time contract in January 2019 and played in four of the five Six Nations games when the Red Roses won the Grand Slam.